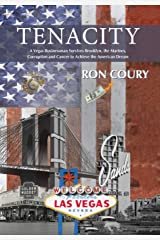 Working in the US Marines, becoming a realtor, surviving cancer, and running multiple successful businesses in Vegas was definitely not easy but required a tenacity only Ron Coury could show.

With Middle-Eastern immigrant grandparents, Coury became aware, at a young age, of the sacrifices they had to make to give their family a prosperous future. Coury was born and raised in New York and started shining shoes to earn a little extra money at the train station. After realizing he enjoyed making money and coming up with new business ideas, he aspired to become a businessman. Coury grew up to serve two years in the U.S. Marine Corps but became a successful businessman with ownership of about eight businesses by the time he was 35. However, the road to success was never easy for Coury, but he was never afraid of hard work and continued to chase his dreams with determination and persistence.

Tenacity by Ron Coury is a highly inspiring read about an ambitious man who remained steadfast in his goals and lived through many personal and professional adversities. Written as a guide and a memoir for people aspiring to be like him, Coury chronicles the qualities of perseverance, determination, courage, and justice he upheld through the years in the face of unjust treatment and unforeseen circumstances. With humor, clever delivery, and sharp wit, the author writes about the people in his life as characters in a novel and creates vivid descriptions for each one of them. This book is a heartwarming memoir that will touch readers’ hearts; the insights and thoughts shared in this book as well as anecdotes from the author’s life are not only entertaining but inspiring.