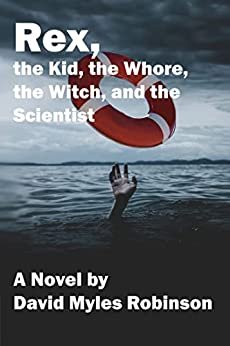 Rex, the Kid, the Whore, the Witch, and the Scientist

Rex Reynold, a wealth manager referred to as the 'golden boy,' loses his young kid at sea when his yacht is attacked and sunk by a Russian submarine. Making matters even worse, his wife seems to have sustained a brain injury during this tragedy.

Bent on covering up the involvement of the Russian force in this incident, Rex is forced by the FBI to falsify the events that ensued at sea, saying that he, unintentionally ran his yacht into a shoal, and in doing so, sunk it while being under the influence. Needless to say, Rex's life is irrevocably changed with his amnesiac wife accusing him for the loss of their son. Consequentially, his wife files for divorce and takes up with an Episcopal minister. Distraught by the unfortunate turn his life has taken, Rex seeks sanctuary and enlightenment at a Psychedelic SPA in MEXICO. This leads him to a small village in Mexico, where he meets Reynaldo, a youthful beggar. While he is there, he learned about Reynaldo's aunt, a probable witch, his mother, the whore, and his father, a scientist from America. Rex's already chaotic life takes a turn for the worse when he helps Reynaldo in investigating a Ponzi scheme and eventually deciphers the reason behind the Russian submarine being on the coast of California.

Rex, the Kid, the Whore, the Witch, and the Scientist by David Myles Robinson brilliantly pairs the seriousness of the plot with a touch of humor and lightness. David Myles Robinson's novels are known for their fast pace, lively prose, and ingenious plots, which readers have come to love. In this fictional, spy-themed novel, you'll find all of these attributes. In addition, he's also managed to merge serious themes of loss with eccentric banter and quirky characters. The novel has Russian spies, but it isn't your typical espionage story. It's packed with high-tech gadgets, yet it's not your typical tech thriller either. Overall, a great read; it is deft, balanced, and hugely immersive.