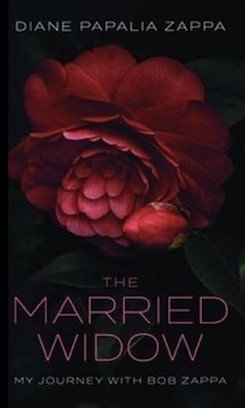 The Married Widow: My Journey With Bob Zappa

The Married Widow: My Journey with Bob Zappa by Diane Papalia Zappa is an inspiring, real-life love story that is as deeply moving as it is entertaining. The connection between Diane and Bob was strong and unwavering when they first met each other in 1986, but circumstances couldn’t allow them to be together. They occasionally crossed paths for almost three decades but couldn’t be together until 2013 when they were free. But then, tragedy struck, and they were separated — or were they?

A bittersweet tale of love and a long journey of soulmates who could only enjoy each other briefly. In this book, Diane chronicles this journey and allows readers to feel their pain of separation, her exhilarating sense of loss when Bob died, and how she coped with the loss. From the very start of the book, the author arouses the curiosity of the reader and shares her emotion after meeting the brother of the famed musician, Frank Zappa: “I felt a need to stay in touch with Bob, and on some level, wanted to know him better, and to have him in my life.” That longing would stay with her for close to three decades, finally becoming a reality.

This is a fascinating tale of love, of patient longing and waiting, and even if the union between Diane and bob was brief, it was utterly transporting and rich. Written in prose that is gorgeous and in a voice that is irresistible, this memoir captures the undiluted emotions of one woman’s extraordinary journey to the man she was meant to love. It is affecting, and Diane Papalia Zappa has the incredible ability to capture raw emotions and explore the different seasons of their soul with unusual clarity and fluidity of expression. What is enthralling about this love story is that it endures even after death and it contains a powerful message of hope for readers who have loved and lost — the dead are never dead but alive. The Married Widow: My Journey with Bob Zappa is more than a mere memoir; it is a wonderful testament of a love that is stronger than death. It will move you in ways you can’t imagine as you explore the intricate world of Diane and Bob.