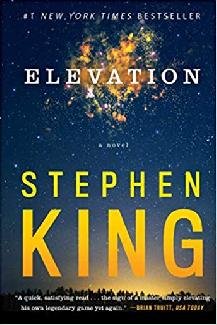 Elevation by Stephen King is an extraordinary tale of breaking barriers and overcoming prejudices to find common ground in a small community. Set against the backdrop of a small town, Castle Rock, readers encounter Scott Carey, a man with a strange affliction. He has been consistently losing weight. But the strange thing is that he weighs the same, whether in his clothes or naked, and it doesn’t change even if the clothes are heavy. He is worried and believes Dr. Bob Ellis could be of help. What follows is a story that brings a small town together, showing how people can overcome their prejudices and beliefs to unite for a common cause —helping Scott Carey.

The apt, unusual descriptions and the atmospheric writing get the reader enmeshed in the story to the point they won’t notice the passage of time. The story begins with the introduction of the protagonist, Scott Carey, “a big man, six-feet-four in his stocking feet, with a bit of a belly growing in front.” His dramatic encounter with Ellis, the seventy-four-year old man with thinning silver hair “and a small limp” —notice the way he describes the characters —opens the drama that is characteristic of King’s style. The premise is powerful enough to get the reader intrigued and interested in the story, but the pacing is a bit slow, especially for readers who want intoxicating action in their stories. But King’s ability to put life into details complement the pace and makes for an enjoyable read.

What is beautiful about Stephen King’s writing is this innate ability to write extraordinary events into the seeming ordinariness of life, allowing episodes that beat the doldrums readers are familiar with. Without taking readers away from their world, Stephen King fills them with an eeriness akin to a dream and leaves them at the end of the story feeling as though they have just come to the end of an adventure. Stephen King explores themes of gay (lesbian) marriage and handles with unusual brilliance the prejudices suffered by people in a same-sex relationships. In the heart of the story is the question —what really unites us? What does it take to live as good neighbors. Elevation is a narrative with great potential for entertainment and characters that feel as real as the couple next door.