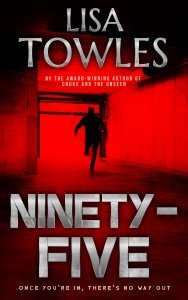 A compelling thriller and a propulsive read for fans of crime and YA fiction, Ninety-Five by Lisa Towles introduces Zak Skinner, a young protagonist and a student at the University of Chicago. When Zak uncovers evidence of organized crime taking place in campus, he is determined to dig to the very bottom of it. The clues lead to more sinister discoveries, and he finds himself faced with a criminal organization with strong ties to the dark web, a world where students are manipulated and blackmailed into committing crimes and on camera. The tortuous path leads the troubled Zak to a house in an abandoned industrial park, where he discovers he is not only hunted by dangerous criminals but that he must come face to face with the one thing he has been running from: his own past!

This is a fascinating story with a fully drawn and sophisticated protagonist. Zak is a deeply and genuinely flawed character whose curiosity and drive to right a wrong will put him into grave danger, and it is interesting to notice how this young man who sets out to hunt criminals become the one being hunted. The prose in Ninety-Five is dazzling, sprinkled with vivid descriptions and engaging dialogues. Towles deftly conveys the depth of human psyche and the humanity of a complex protagonist whose desire for a new start in a new university plunges him into a chaotic world riddled with crime and danger. The unpredictability in plot will be torturing for some readers as they race through the pages, guessing what happens next.

The fun is never sacrificed and the story is never lacking the drama that elevates the quality of great writing, and as the reader reads from page to page, they find themselves submerged deeper into the twisted web of crime. This sprawling tale of crime and intrigue is a winner and it is hard to not get engaged with the realistic and likeable young protagonist. The descriptions are vivid and detailed and the darkness that attacks the soul of the protagonist rubs off on the reader. The world this author creates is detailed and well-imagined, crafted to engulf the reader and force them to follow the clues towards an unpredictable denouement. This author delivers an intelligently plotted story that keeps the reader engaged from first to last page. The first-person narrative voice is expertly delivered and absorbing and the characters are unforgettable, imagined in a complex web of crime.