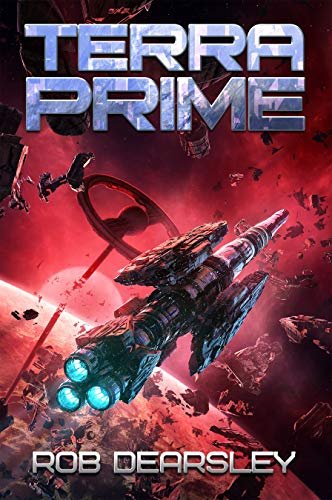 The sci-fi thriller Terra Prime is the second book in The Terran Legacy series by Rob Dearsley, a sequel to Slave Mind and a novel that reads so well as a standalone novel. Captain Michael Dannage, who fears that either his brain has actually been stolen or that he has lost his mind, is woken up by horrifying dreams and soft, terrifying voices that echo in the darkness.

Almost a year has passed since sentient warships of the Terran Imperium came through the colonized space and took over. This happened during the last and final battle when, in order to save the world, Michael had to connect the ships together, and now the Terrans won’t let go! As the Terran ships crawl and slowly take over Michael’s sanity, the wise captain needs to find a cure before it’s too late. Along with his crew of the Hope’s Folly, Michael sets out on a search to save himself before he completely loses track of his thoughts and is at the mercy of his failing mind. But he doesn’t know that the quest to redeem his mind is fraught with far more dangers than anything he has ever had to encounter as a captain?

The mission thrusts Arland, Michael, and the crew in the firm grip of black-market scientists and in the midst of the political machinations of the secessionist government and the face-to-face with the life-endangering mission to get his mind back from the heart of the ancient Terran Prime. But little does the group know that their visit to the Terra Prime is set to unleash some of the darkest and oldest secrets that should have never existed in the human world.

Mysterious, gripping, and terrifying, all the same, Terra Prime (The Terran Legacy Book 2) by Rob Dearsley is a whirlwind ride for everyone who dares to read it. All said and done, it’s not for the faint-hearted. This is science fiction that has all the elements of what readers look for: sophisticated characters, twisty plot points, strong themes, and impeccable world-building. The story has the potential to transport fans of the genre and ordinary readers, thanks to the intriguing plot, the strong themes, and the nuanced characters.
Reviewed by Kim Calderon Review Date: October 14, 2021