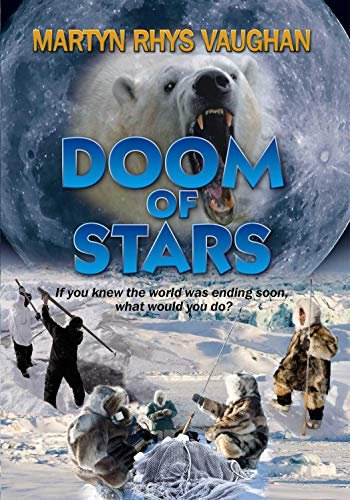 Doom of Stars by Martyn Rhys Vaughan melds science fiction with fascinating elements of fantasy, a tale that is set against the backdrop of a dystopian world riddled with disastrous climate changes. The world is dying around Kalli and while everyone is appalled and suffers the effects of climate change and impending doom, her pain is even greater than what anyone else experiences because the dismal fate that awaits humanity is linked to her grandmother. But she has the secret knowledge of how it all started. Does she have what it takes to stop the Doom of Stars?

Martyn Rhys Vaughan presents a cast of fully drawn, nuanced, and multidimensional characters, each of them caught up in the struggle for survival, disturbed by the impending disaster that is about to happen to the Earth, and worried about the future. Reading about gifted characters like Elizabeth Baldwin, one of the best scientists that ever lived and her worries about the annihilation of the Earth is both fascinating and mind-boggling. Tamira Adekola and her partner, Idris Parry, are amongst the well-sculpted characters, each caught up with the struggle in their own way. The author uses these characters to show the anxiety and the pain that inhabit the human spirit when disaster strikes as the characters watch the Earth die around them.

While Doom of Stars is futuristic, it echoes some of the unsettling realities that humanity faces and makes for the most relevant read for contemporary readers. Themes of science, climate change, love, sexuality, and extreme, inclement weather are deftly developed. The author succeeds to force readers to reflect on the fate of the Earth faced with an environmental crisis. The pathos is strong, the writing brimming with realism and humanity; the characters are real, emotionally, and psychologically rich. Martyn Rhys Vaughan’s writing is balanced, capturing the most interesting elements of the setting, featuring a conflict that escalates at the different levels and in incremental doses, and presenting characters that evolve in fascinating ways as they confront the harsh reality of their time and age. The bright and clear prose mixes with the suspenseful plotting and Martyn Rhys Vaughan’s impeccable world-building to create a unique and enthralling reading experience.